0 Comments
A year is fulfilled since the introduction of the first phase of the tram in Zaragoza.

At the end of the post you will find my personal opinion.

To explain to the citizenship the second phase of the tram, we were requested to product several urban renders to explain the visual impact.

In this occasion, in contrast to the infographics of the first phase, the tram did not play a leading role in the images. People had already been used to its presence in the city. Our urban render work consisted of transmitting changes in the urban layout of the city that this second phase was going to cause. Showing the tram as the focus of their wake was not interesting. The point was transmit the benefits of the solution in relation to roads, green areas, bike paths, etc.

The information provided by the team of architects Alday Jover, consisted of:

Plans of the routes and details of any kind regarding the catenary, street lamps, awnings, paving,… 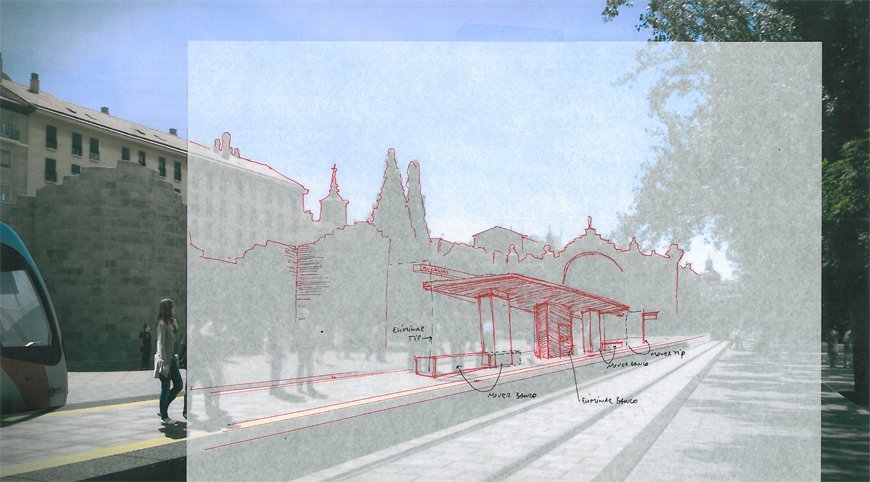 Before knowing this data, we conducted a “fieldwork” consisting of obtaining photographic details. 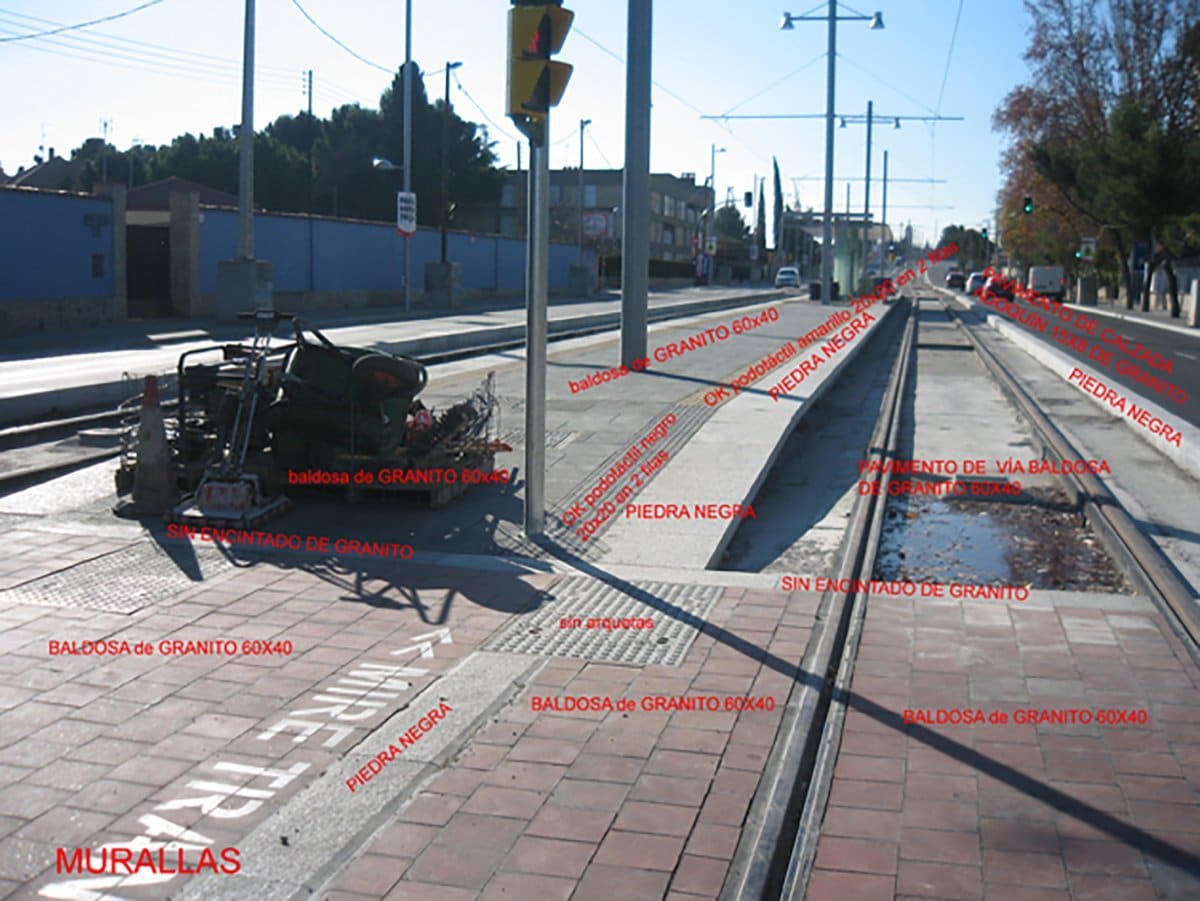 We started with the advantage that the first phase of the tram was executed and running. We collected information on how are the catenary, awnings, road surfaces, vending machines…Once known the locations, and praying for the day come out sunny, we approached the four locations for several days to take photos. Later, in dialogue with our clients, we chose the photos, that for different reasons, would be the basis of the urban render.
Our intranet system for clients allowed an effective process of “feedback”. Pictures were uploaded and the various responsible for the final result made their comments. In projects of this nature where the customer is not unique, our system allows to create a record with all the appreciations and suggested changes. It is essential for not having contradictions.

It is one of the main boulevards of the city. It is very recognizable by citizens. Consequently, the margin for error is zero. Any details made bad could be detected immediately.A central point of view was chosen. The reference to current rails, was the key to the proper matching of 3d scene over the photography made (I must say with a plus of dangerousness).
Eliminating taxis of the photo caused the appearance of voids. We had to recreate the “hidden” sidewalks. People were incorporated, new trees, facades and arches were retouched. In short, everything you need to recreate as faithfully as possible the project and the environment.As I said, the tram should appear in the urban renders, but it should not play the leading role. Initially, I had more presence in the proposed photomontage.Finally, it became the background.This decision cost us a lot to digest because, as we did not know initially this decision, we modeled in great detail the tram in 3 dimensions. 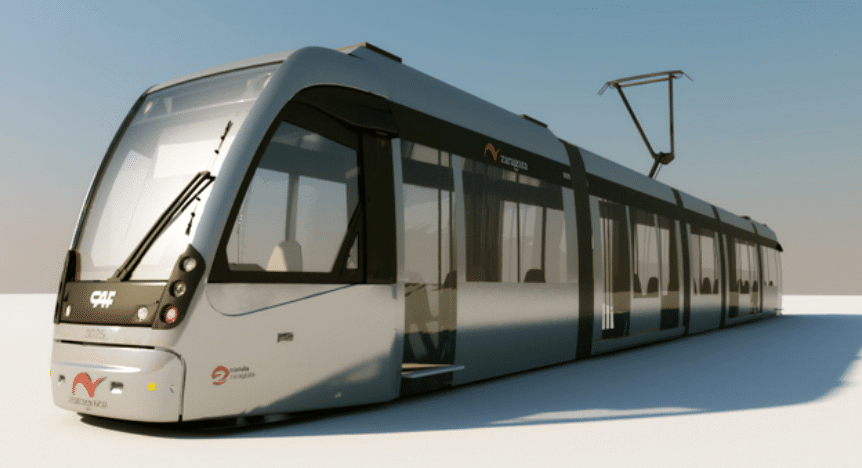 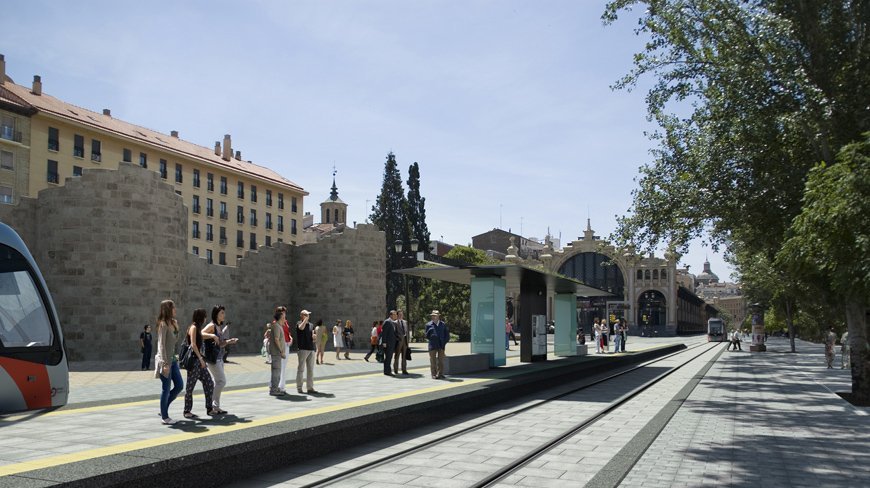 Another site that resides in visual memory of citizens. The more elements must be removed from the base picture, the more complicated the photomontage.In this case, all existing vegetation in front of the walls had to be removed. To do this, we modeled and texturized the walls in three dimensions, we completed the parts of the building in cream placed back and “cleaned” the fence near the Mercado Central. The sidewalk on the right is extended. We modeled it and put some “invisible trees” that provided shadow. The other elements, platform, benches, rails, were easier to incorporate into the urban render.
The incorporation of people and a thorough study of photo lighting, made the final result consistent.Images with a more obvious presence of the tram were also discarded. 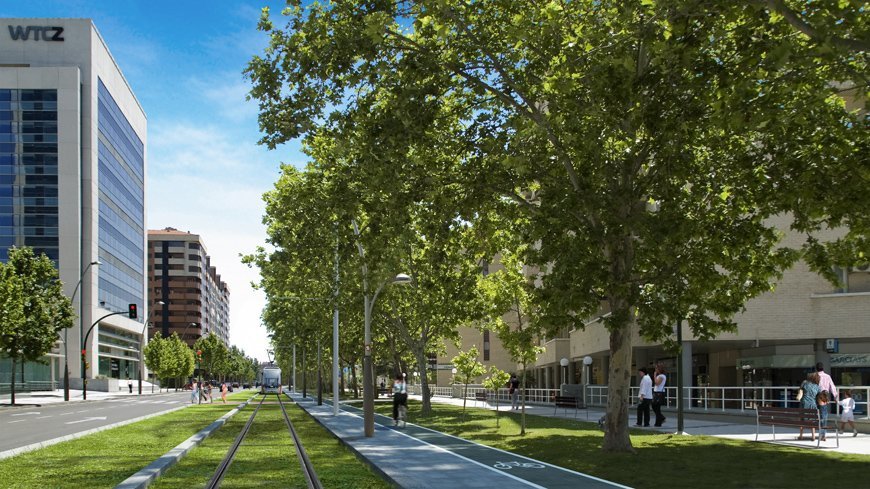 Unlike the above locations, we needed the presence of the World Trade Center to locate the viewer.The protagonists of this photomontage were the successive lines of urbanization: lanes for road-way traffic – tramlines – bike path – green parterre and sidewalk.
Recreating the shadows of the trees dropped on the bike path and routes and new trees placed on the left required special attention.

It was the least recognizable location. First, performing serial multiple photos was necessary.
From there, they were joined eliminating the existing tree at the roundabout. It was important to visualize the confluence of streets and the introduction and crossing of the rails in the neighborhood. When this is done, the realization of urban render is complicated. The vanishing points are confused and it is harder to fit it all.As it was expected, the news of the works of the second phase of the tram, grabbed some covers in the local press. 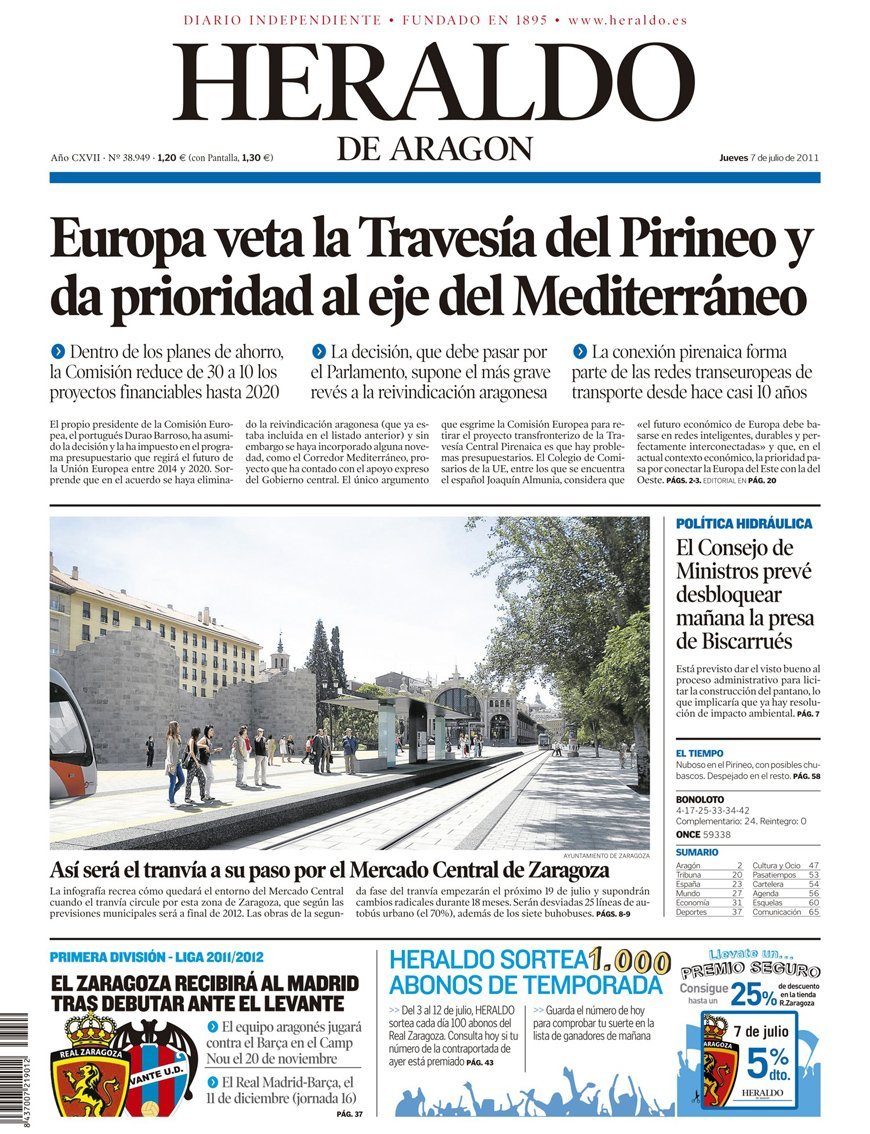 My opinion on the tram

I already say it is contradictory. On one hand, I am against the operation.On the other hand, I enjoy the benefits today. It is fast and efficient.
However, I think it is a return to the past. These are my arguments:

We also developed another tram project. This time for Balear Govern.

Let’s enjoy the tram. The desire of a few has been achieved. In short, a streetcar named desire.